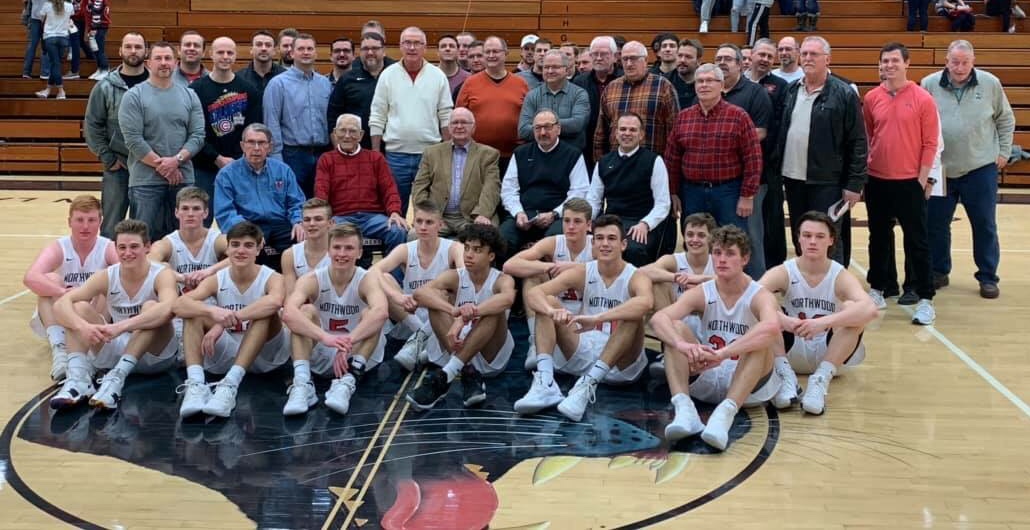 The boys basketball program recognized its proud history by celebrating its 50th season tonight. Over the last fifty years the Panthers have had many seasons to remember and during halftime the alumni from the last 50 years were recognized!

With the Pit packed and rockin’, it was the RedHawks who came out firing to a 12-3 lead after the first quarter. NorthWood however would answer in the second quarter after going on a 12-0 run. The Panthers would win the rebounding in the half and the transition game to enter halftime up 21-19. By the games end, NorthWood found themselves sealing the game at the free throw line and winning the NLC matchup 52-43.

NorthWood was led by Ben Vincent who finished with 21. Vincent knocked down 4 triples on the night. Trent Edwards finished with 11 points, 6 rebounds, and 4 assists. Nick Bean chopped in 8 points, 5 rebounds, and 3 assists. Jason Borkholder and created a spark off the bench delivering 6 points and 6 rebounds (4 offensive).

Prior to the JV and Varsity tip-off, both Goshen and NorthWood had elementary ballers showcase their skills in the new AC. NorthWoods outstanding band was also playing host to their Backyard BBQ Fundraiser.

After a great JV Panther win, NorthWood celebrated their Snowcoming Court with Seniors Ashley Escamilla and Matthew Lehman being honored as Queen and King of the Snowcoming Court!

No Events This Week

Events are added by athletic staff.
View All Events